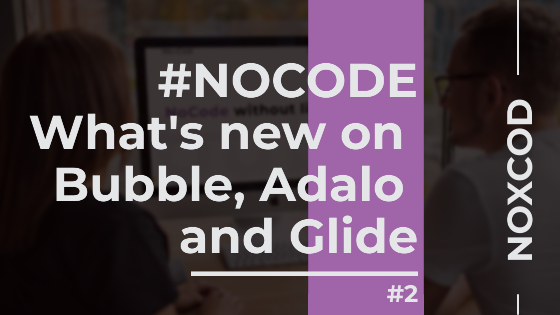 A Conference, Optimisations, New features… Quite the autumn!

These past two months have been full of surprises for the no-code community: new features and releases everywhere, along with the very first Zero Code Conference! Let’s have a closer look…

… that you can relive whenever you want! The Zero Code Conference 2020, orchestrated by our friends at Zeroqode, took place on the 7th and the 8th of October. Now, maybe you were on vacation, off the grid, or maybe you just didn’t save the date? Well that’s not a problem, since you can watch all the highlights of the conference directly on Zeroqode’s website (subscription required).

You’ll have access to more than 25 courses and 20 sessions on demand, for more than 16 hours of lectures and debates from the greatest experts in the field (Bubble, Stacker, Adalo, Typeform, and others!), just as though you were there with them!

The New York giant (no pun intended) Bubble was already in the spotlight by the end of last summer with the announcement of their new slug system, along with their integration of Figma design software. This time, they strike again with a plethora of features and betas.

Users are celebrating the arrival of the long awaited A/B Testing with Google plugin, which will allow you to pit two versions of each of your pages against one each other, in a contest of marketing and metrics. You’ll get live information on which gets the more subscriptions, which gets the more clicks on a particular link… On top of that, everything is seamlessly integrated in every segment, to allow you to manage your SEO on the fly. Available now on Professional-tier and above apps.

In another development, Bubble proposed a complete revamping of their search engine, the implementation of an export system under the “Languages” tab (useful for outsourced translation and editing work),

Also of note, their slug system, which aims to clean up your URLs by associating each element of your database with a hierarchical value, is finally getting native support. You’ll get total customization, along with cleaner results!

Finally, we are proud to announce the arrival in December of our very own Bubble course. 3 weeks to hone your skills around the different processes managed by the no-code icon, from creating your database to exporting your app on Android and iOS. Learn all about it here!

As always, Adalo prioritizes the practical and intuitive aspects of their UIs. The major player in the app creation game just added a few features that should please app designers as well as their users.

Right off the bat, the implementation of third party login with Google and Apple will allow you to integrate two easy systems to your sign-in and login pages. Having to invent a new username and password each time is a thing of the past!

However, it is important to note that for the Apple plugin, further configuration is needed (all the steps explained here).

But their big break of the autumn lies with Adalo Collections API. Every single app created with Adalo now has its own API, which can be accessed via the Data tab, and is modified instantaneously with every collection added in your database. No more updating the documentation manually every five minutes! Connect and interface your apps with external tools and systems, easily and rapidly!

Saving time, when you're designing an app, is paramount. The experts over at Glide know that well, and endeavour to facilitate the word of no-code developers, by giving them ever more tools and more freedom.

That’s why, this autumn, they ramped up to deliver a complete overhaul of their data editor, claiming that this version is ‘5 times faster when it comes to scrolling and interacting’.

Among the new features, the integration of the search and replace function, the option to add new lines and columns on the go, and to resize them at will.

Aware of the ever-increasing importance of protecting the privacy of users, Glide implements an anonymous email feature: every new user is given an anonymous email address, to reduce the amount of personal information accessible to the devs.

This feature being invisible to the user, it’s up to you to decide whether you want to inform them of it or not. In the future, Glide will roll out a feature allowing you to forward your emails straight to the user’s real inbox.

Also, they improved upon their “Preview as” feature: you are now able to display a preview of every single one of your pages, as seen through the eyes of a particular user.

If your app supports multiple user profiles, you’ll be able to select each and every one of them, and see pages as they will see them in-app. An easy way to check the final look of your more user-centric elements!

And who never dreamed to be a video game designer? It could soon be within the reach of everyone thanks to no-code design. Case in point: no-code developer ‘J805’ managed to build a small tribute to the legendary (no pun intended) first Legend of Zelda game, aptly titled ‘Legend of Zeldinia’, and this, only using Bubble! Of course, it looks a bit basic, but this represents quite the opening in the realm of the possibles with no-code design.

A project to follow, but also to test out! Our no-code game designer indeed took the time to develop a creation interface, allowing anyone who wishes to follow in his footsteps and created their own mini-game, by uploading assets and defining the various rules and elements. Who knows, you just might be the next big game tycoon, and join the video game hall of fame alongside Shigeru Miyamoto!

A question? Need advice or info? Or simply want to debate around which platform is the best? You are not alone! No-code design is a community, so join us on our mutual support Facebook page!

Every week a summary of the nocode news Bubble and Adalo, themes, plugins and much more.

Thank you! Your submission has been received!
Oops! Something went wrong while submitting the form.

We have been immersed in the development community for several years now, and have been able to identify the power and speed of NoCode development.